The Origins of Thanksgiving

Over the centuries, Thanksgiving has become a special day to share a home-cooked meal with loved ones and an offering of thanks for our blessings. In many ways, Thanksgiving is the quintessential “Slow Food” holiday. And yet, as many of us know, Thanksgiving has a complicated and controversial past. As we celebrate with family and friends, it’s worth remembering the complexity and suffering from which our modern holiday of love, food and family was born.

Many of us are familiar with the story of the first Thanksgiving: Pilgrims celebrated a
successful harvest after a few years of starvation and struggle together with friends from the Wampanoag Nation. That harvest was made possible thanks to the knowledge, seeds and traditional farming practices that the Native Americans shared with the newly arrived settlers.

What many of us don’t know is the story that followed in the intervening years
between that celebration and the holiday of family, food and giving that many of us are familiar with today. Following nearly two decades of peace, newly arrived Europeans began massacres of native peoples across the northeast over issues of land rights and ownership. (These killings were widely condemned by the original Pilgrims – many of whom were expelled from the society for voicing their opposition).

After one particularly successful massacre in what is now Connecticut, settlers gathered for a feast of “thanksgiving” – giving thanks for their victory over the native peoples. This is the tragic story of the second Thanksgiving. In subsequent years, as the killings across the northeast took on a frenzy, settlers held feasts of thanksgiving after each successful slaughter. By many accounts, George Washington brought order by declaring one day to be celebrated across the nation as “Thanksgiving Day.” Thanksgiving then became an official state holiday during the Civil War when Abraham Lincoln declared that it would fall on the fourth Thursday of every November.

Though none of us alive today took part in these atrocities, it is important to know the full context of the holiday in order to understand why some people find it difficult to celebrate. It is through this awareness that we bring thoughtfulness and true thanksgiving to our enjoyment.

About this Project
The purpose of this project is to celebrate the diversity of food cultures and harvest traditions that are rooted in the land and people across the United States. We acknowledge that we were only able to highlight a small sample of the rich variety available.

Learn more about the original Thanksgiving:

via Slow Food USA: Harvest Celebrations Across the USA.

In order to photosynthesize and make food, plants need a minimum of both sunlight and warmth. Summer tends to have both. Most of the temperate zone gets about half of its total annual allotment of solar energy over 100 summer days.

Cold weather is very hard on the plants that produce our food. They can’t move to seek shelter the way animals do. Temperatures below the freezing point of water not only stop photosynthesis, they quickly kill many plants. When water within and between the plants cells freezes, sharp ice crystals form that can rupture the cell walls that protect the plant’s key functions.

And yet, some food can be grown in cold weather. How can kale, collards, mustard greens, Swiss chard, scallions, turnip greens, beet greens, lettuce, and various Asian cabbages and mustards continue producing food long after tomatoes, peppers and zucchinis have closed up shop for the winter? Cold-hardy plants use two different strategies for preventing fatal ice crystals from forming. The most common approach is to lower the freezing point of the water they hold with dissolved sugars and the amino acid, proline. This is like putting salt on icy roads to lower the temperature at which the water freezes. The less common but more amazing trick of cold-hardy crops is the use of specialized “antifreeze” proteins. These are molecules that bind to the surface of tiny ice crystals and prevent them from forming the large sharp crystals that rupture plant cells.

Almost all of the food crops that grow well in cold weather are greens. This is no coincidence. With all plants it is the green leaves that initially create the food. When there is adequate warmth and sunshine most plants can afford to send much of the food formed in their leaves to be saved in roots, as with sweet potatoes, or to make fruits and seeds. Both of these processes require a surplus of carbohydrates to be produced by the leaves, and that surplus is produced in the summer.

With leaf crops we eat the initial stage of production before the plant generates surplus food. Most people think of warm summer days as the time to garden, but leaf vegetables can be successfully grown in much cooler weather. Seeds should be started a bit before the first frost so they can get in some growth before the onset of very cold weather. Once established, the hardiest greens, like Siberian kale, can be grown right through the winter in most locations. A simple cold frame or floating row cover can provide some extra protection against the cold.

Your winter garden will grow very slowly, but it will grow. And the bright flavorful greens that you harvest through the snow are most welcome in the middle of winter. Packing more vitamins, minerals, and protective antioxidants per calorie than any other category of food, winter greens can help keep you healthy and fit till the first buds of spring. Cold weather greens are Slow Food at its best.

via Slow Food USA: Keep Growing Slow Food, Even When Tomatoes Have Gone.

The burrito chain is putting $500,000 towards the program. That’s a lot of burritos. 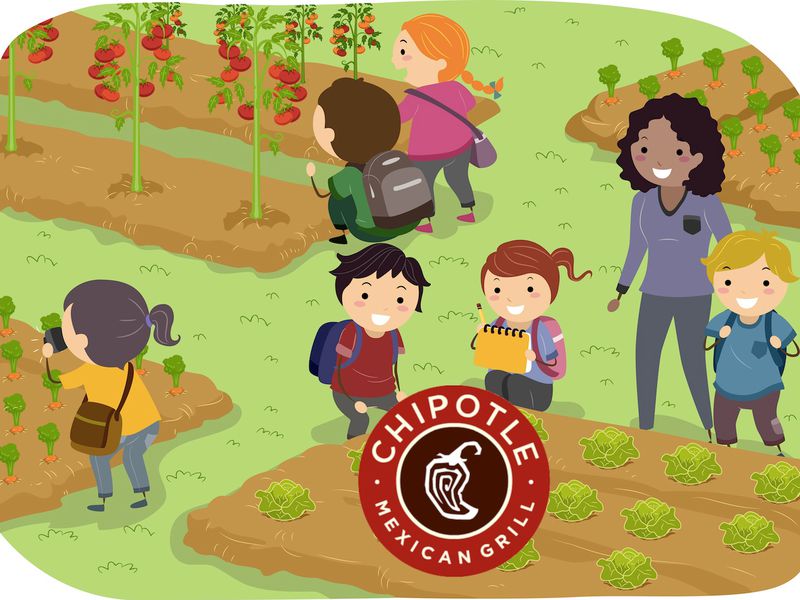 Chipotle is partnering with Slow Food USA to build and support 100 school gardens across the country. According to a press release, the two companies hope to teach kids “where food comes from and how it is prepared.” Chipotle will donate around $500,000 to the cause and, will offer funding to the schools through micro-grants and fundraisers at Chipotle locations.

Local Slow Food USA chapters will provide a “customized curriculum, funding, labor, and other resources to match the needs of the individual schools.” The school gardens will be built in 10 metropolitan areas including Boston, Denver, and Phoenix.

Chipotle has a history of partnering with organizations to teach kids about nutrition. Back in 2012 the burrito chain teamed up with Veggie U to distribute gardening kits to school throughout the country to “show kids the importance of nutrition and agriculture.”

Organized by the West Windsor Community Farmers Market for

In collaboration with the organizers of the West Windsor Community Farmers Market, Slow Food Central New Jersey is proud to announce its tenth season of indoor winter markets.  Visit the market at the D&R Greenway LandTrust in Princeton to discover the season’s best local foods.

Slow Food USA is working to change the food system through a network of volunteer chapters all over the country. The Central Jersey chapter holds education and awareness events such as potlucks, off-season farmers markets, trainings and workshops.  These farmers markets spread awareness and allow folks to enjoy locally grown and healthful foods while helping to support local farms and food artisans throughout the winter months.

Visit www.slowfoodcentralnj.org or westwindsorfarmersmarket.org for a full list of farms and vendors or call 609-933-4452 for more information. Native Grassland Preserve in Franklin Township and weighed herself on Election Day. She then rounded up the 51 heritage breed turkeys she raised at Green Duchess Farm this season, picked them up individually and weighed herself with them in her arms.

Ultimately, she lifted over 700 pounds.

Although Isbrecht is a third generation farmer, 2014 was her first season at her own farm. She left her family farm in Warren County in 2000, received a B.S. in Biology from University of Delaware and worked as an environmental consultant. Her mother succumbed to a battle with a rare form of lymphoma in 2013. Reeling from the loss and the knowledge this type of blood cancer is hereditary, Isbrecht realized life is short and chose to return to the farming lifestyle she loves.

“ Isn’t it sad how a tragic loss or some tragic event has to happen to make you look at your life and decide that you want to be happy? “ she asked.

Her own happiness has remarkably grown and taken flight with these turkeys. Thinking back over the season she realized, “Being around these animals has been so much fun for me and such a joy which I didn’t expect. I loved spending time with them and watching them.”

“I chose to raise them to try to educate people about the importance of our food system and where our meat is coming from and how it is raised. A lot of people are not as aware as I think they would be,” she said thoughtfully.

Isbrecht settled on raising theBourbon Red turkey, a heritage breed that came close to being extinct after the broad breasted white turkey become the most consumed breed in North America. The Bourbon Red is known for having excellent flavor and foraging capabilities.

Before deciding to raise the breed, though, she had never actually tasted it. She got her chance in September, when she was forced to harvest an injured turkey earlier than expected.

“The turkey that I ate tasted excellent. It is rich flavored. The white meat is closer in proportion to the dark meat. The breasts are not large and round like the grocery store turkeys,” she said.

Isbrecht credits their unique diet for their flavor, adding: “They really have a terroir like in wine.”

At the beginning of the season, Isbrecht admits to being a bit of a mother hen. She checked on them incessantly. Turkey chicks, or poults, need more care during the brooding process than chickens, which she also raises.

Have you read “The Third Plate” Yet? Dan Barber is a chef that has really been paying attention on how to source and cook ethically grown really good tasting food. “The Third Plate is grounded in the history of American cuisine over the last two centuries. Traditionally, we have dined on the “first plate,” a classic meal centered on a large cut of meat with few vegetables. Thankfully, that’s become largely passé. The farm-to-table movement has championed the “second plate,” where the meat is from free-range animals and the vegetables are locally sourced. It’s better-tasting, and better for the planet, but the second plate’s architecture is identical to that of the first. It, too, is damaging—disrupting the ecological balances of the planet, causing soil depletion and nutrient loss—and in the end it isn’t a sustainable way to farm or eat.

The solution, explains Barber, lies in the “third plate”: an integrated system of vegetable, grain, and livestock production that is fully supported—in fact, dictated—by what we choose to cook for dinner. The third plate is where good farming and good food intersect.